Ahmed Ozov: My donor is a hero of our time

In Hannover, on the shore of the Maschsee lake, two men face each other. The shorter one, unable to hide his tears, tries to wipe them away as he repeats the same Russian words: “thank you”. The other smiles, hugs him and says reassuringly, “everything is all right”—in German. They don’t quite understand each other (one doesn’t speak Russian, the other doesn’t speak German), but just then, they don’t need to. They both know why they’re here, and they know what they’ve been waiting to tell each other for so long. Please meet the latest heroes of the Blood Family project: Ahmed Ozov and his bone marrow donor, Timo Sandau from Germany.

The day before the meeting

Ahmed is waiting to board at Sheremetyevo Airport, and that gives us time to talk. He’s anxious. His trip to Germany is an epic event not only for him, but for everyone in his big family. Until now, none of Ahmed’s relatives have ever been abroad.

“Over the past month, while I’ve been preparing for my trip, my friends and family have asked me dozens of times whether I can imagine what my donor looks like. But honestly, I don’t care,” Ahmed tells us.

Three years ago, we were only told his gender, weight and age. He was 25 and he weighed 84 kg. I also figured he must be taller than me. Say, what’s he like to talk to?” Ahmed asks. He’s happy to hear that Timo was very polite in writing.

The rules say that the donor and the recipient are only allowed to see each other two years after a successful transplant. Over the three years since, Ahmed couldn’t stop thinking about seeing him. He kept coming up with all kinds of different plans for making it happen, like finding out the donor’s contact details and making his own way there. He could bring his little sister, who’s been studying foreign languages. “This spring, I went for a check-up at the Dmitry Rogachev Centre. When I came home to Nalchik, I went back to thinking about needing to meet my donor. And that very moment, I got a call from the charity, telling me about the Blood Family project and offering me a trip to Germany. I can’t even remember what I said to them—I was completely dazed. They asked me whether I had an external passport. I didn’t, and they take a month to get. I remember how alarmed I was. I had to wait a whole extra month? That was forever!”

Ahmed is very popular with the volunteers, the doctors and many charity staff. He came down with acute lymphoblastic leukaemia a very long time ago, back in 2013. He clearly remembers waking up in the middle of the night with a sharp pain in his back, being taken to the local hospital, and then being transferred to the Dmitry Rogachev Centre. His treatment was a lengthy process. 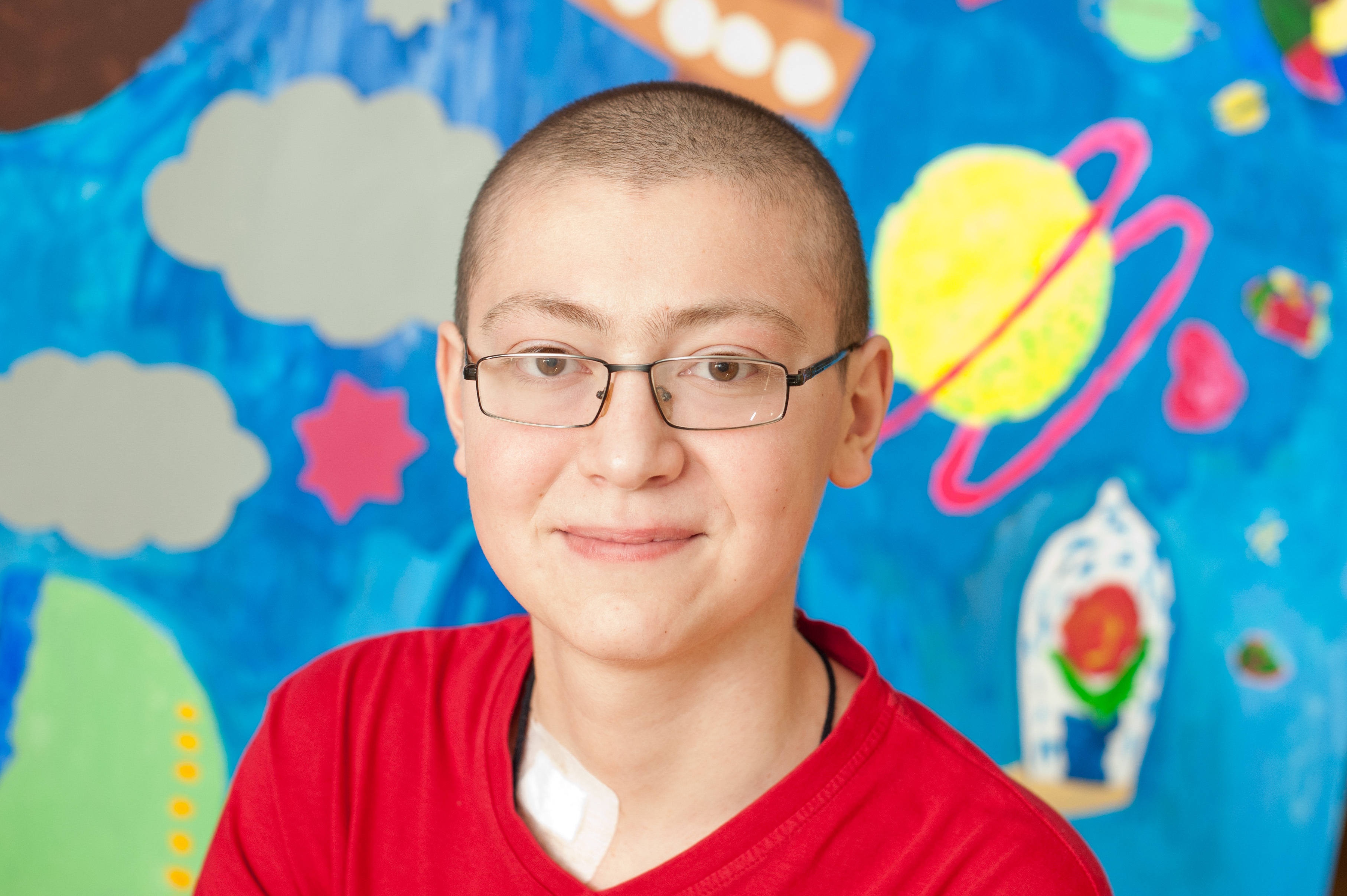 In hospital in Moscow

When Ahmed was finally in remission, he was often allowed to go home, though even there he was living on an endless stream of pills. And of course he had to keep coming back to the hospital. “I have this kind of genetic breakdown in my body. It meant I went from medicine to medicine. I didn’t have a relapse, but I didn’t go into full remission either. That’s why when I got hospitalised yet again, the doctors said that the best thing to do would be a bone marrow transplant. They gave me time to think, but I decided at once that I had to go through with it. What if one day none of the medicines help, or I have a relapse? My mother, on the other hand, was sceptical.”

“Of course I was terrified,” recalls Anzhela, Ahmed’s mother. “But my son made his own decision. He said that if he had even the slightest chance of never having to go back to hospital again, he had to go for it, even if it meant risking his life. None of his family were compatible as donors: not me, not his dad, not his sister. We finally found a donor in Germany. By that time, we were ready to agree to anything.”

Ahmed had almost 100% compatibility with Timo’s bone marrow. The transplant was a success. There were a few complications, but Ahmed managed to deal with them. In as soon as half a year he was allowed to take a trip home. Then they released him altogether. Ahmed went to college to train as a dental technician, made a whole heap of friends, and got into volunteering.

Ahmed’s story spread through the social networks, and got retold not only by classmates he hadn’t seen in ages, but by absolute strangers. “I feel a little like a celebrity,” Ahmed says humbly. “After last time, when they had a programme about me on Channel 5,”—during the fundraiser for the transplant—“people in Nalchik recognised me in the street. They’d come up to me, ask after my health, and wish me luck!”

The day of the meeting

In the morning, Ahmed barely says a word. He’s visibly nervous. Presents for Timo have been duly packed and bagged. On the way, Ahmed repeatedly (jokingly, of course) tries to turn around and go back to the hotel. What if something goes wrong? But even as he thinks that, Ahmed keeps going and promises he won’t cry.

The meeting was arranged at one of Hannover’s scenic spots, by the lake. Timo is already there, waiting for Ahmed. He turns out to be tall, with brown hair and eyes, rather than the blond we expected. Ahmed says his own very dark hair has got visibly lighter since the transplant. A coincidence? 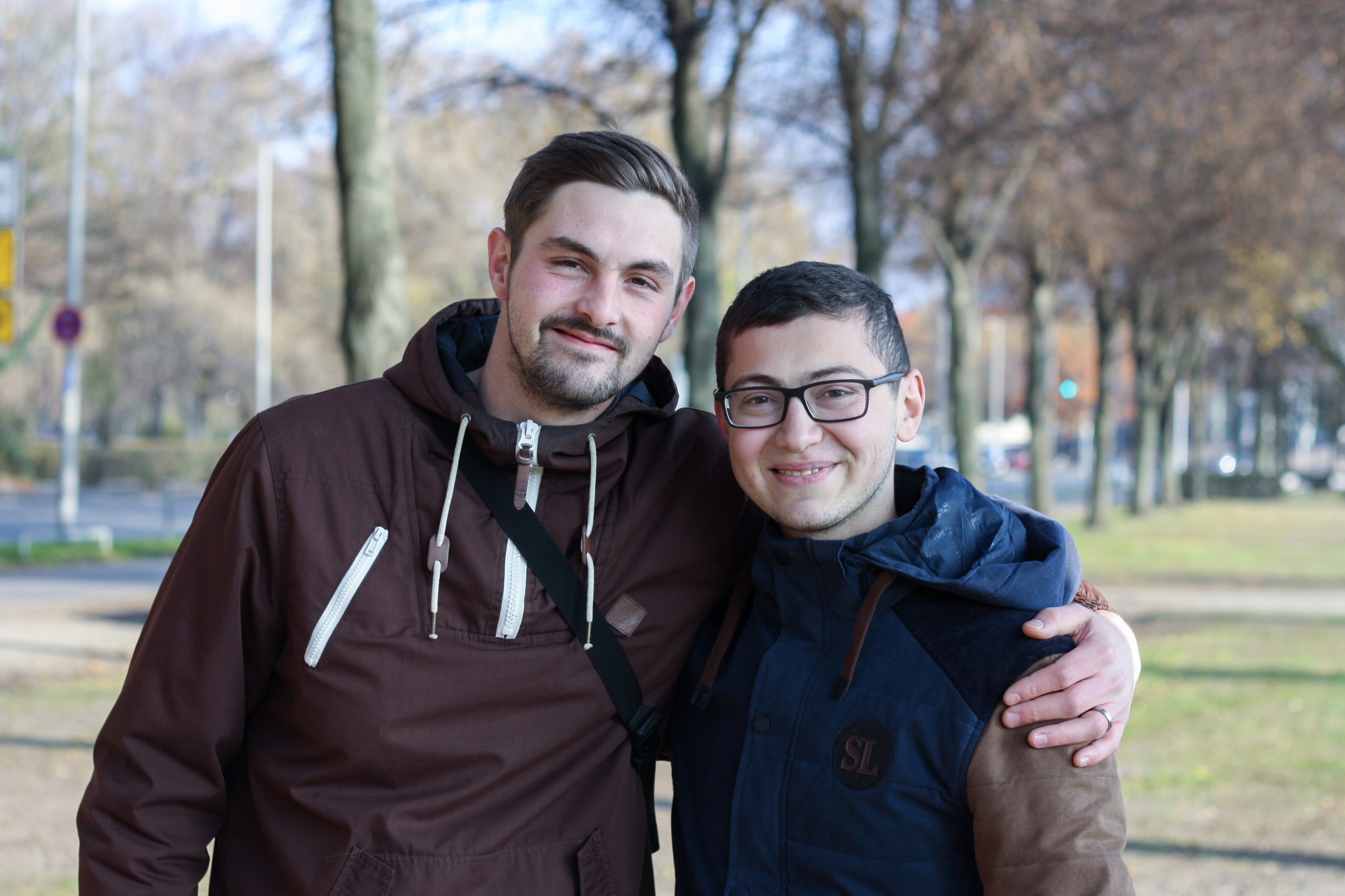 With Timo, his donor and the hero

The pair hug each other, and Ahmed breaks his promise to himself not to cry. But how could he hold back his feelings? For some minutes, the Russian “thank you” overlaps with the German “everything is all right”. We’re sure that they can understand each other with no need for translation.

Timo’s parents and fiancée watch the meeting. They can’t help crying either. Finally, when that first burst of emotion cools down, Ahmed asks the main question that’s been troubling him all these years: how did Timo decide to become a donor? After all, that was the choice that saved Ahmed’s life.

“At the time, three years ago, my friend also found out he had leukaemia. My football team organised a special event for him—anyone could donate blood for typing. Our whole team took part, as did our friends and relatives. There was a whole crowd of people. I donated too, because I knew that even if I couldn’t help this guy, I could help someone else. It only took three months after typing and then I got a call from the Stefan Morsch Foundation telling me I was compatible as a donor. They asked if I was willing. I thought about it overnight, let it sink in, and then the next day I called back and said of course I was willing to be a donor. I wanted to help. It wasn’t a difficult decision. I just imagined myself in that person’s place. What if something like that happened to me? It only took half an hour to extract the cells, and I was quickly back to normal. It’s simple enough that anyone can do it. 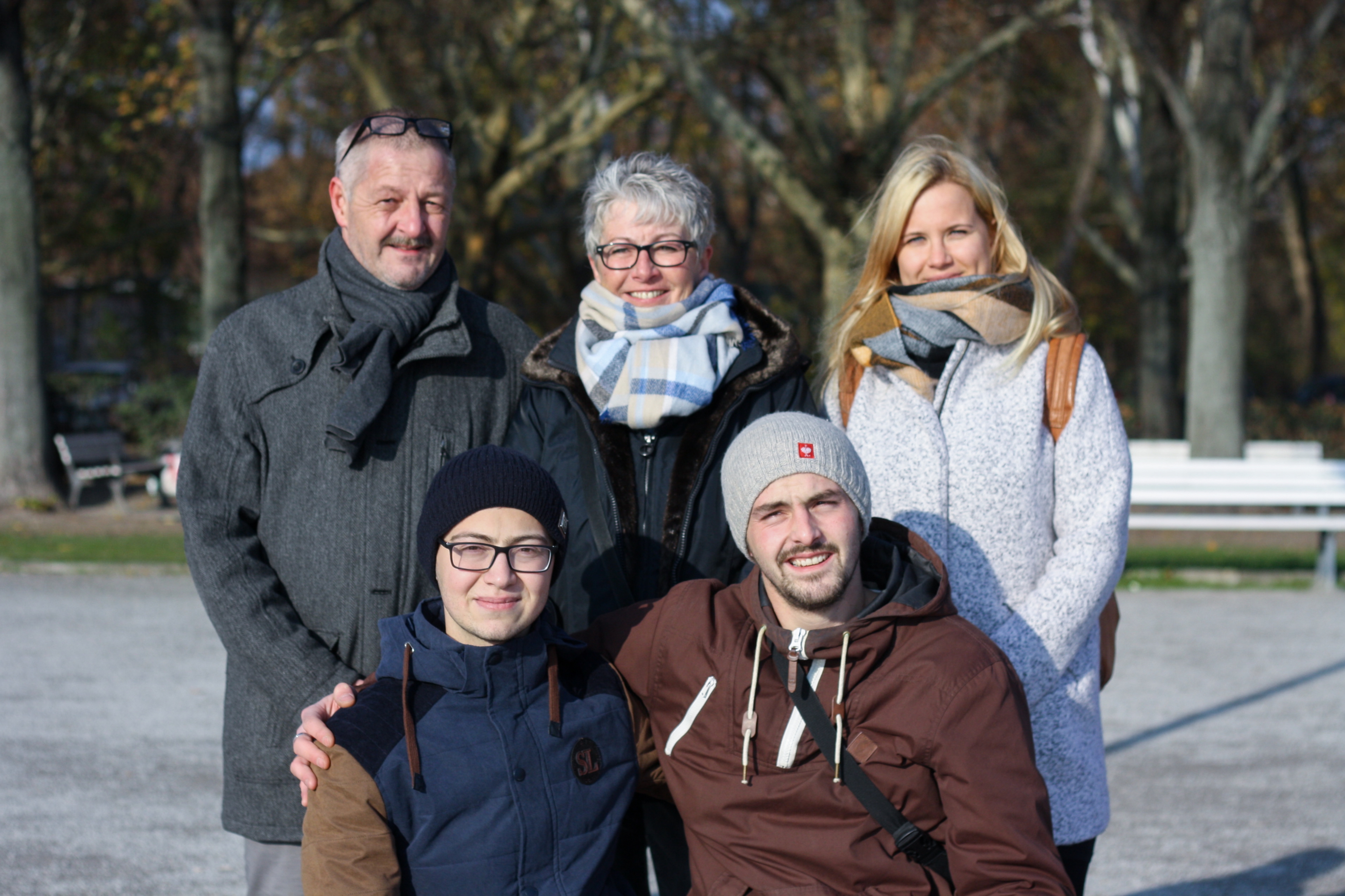 With Timo and his family

“After they took my stem cells, I spent a lot of time thought thinking about the Russian boy who would be able to use them. I wondered where he was, how he was, how he was doing and what he looked like. So when they called me and invited me to meet him, of course I said yes!

I don’t think of myself as a hero. In our country, this kind of thing is normal. We have a lot of social advertising both in the media and in public spaces, calling for people to donate blood for typing. But of course, my case—where they called me almost at once, after three months—is awesome.

Brothers not only by blood

Ahmed is a little shy at first, but soon all barriers, even language ones, crumble. He pulls a Russian-German phrasebook out of his rucksack, which completely wins over Timo’s family. He clarifies the difference between “Hallo” and “Guten Tag”, and then a little while later logs into the Internet and starts talking through an online translator. He writes huge sentences in Russian and hands them over to be read in German.

Meanwhile, we keep looking for similarities. Turns out that after the transplant Ahmed started liking chocolate, and can now eat it day in, day out. Timo has just as big a sweet tooth. After the transplant, Ahmed’s started to draw. Timo laughs and tells us he has no skills other than football. Apart from that, it turns out they share a love of citrus fruit.

What follow are lengthy conversations about Ahmed’s family, his mum, dad and sister, and his people’s traditions. Ahmed passes on his parents’ invitation, telling Timo that he absolutely has to visit Nalchik and, of course, stay with them. He promises to show him Elbrus and all the beauty of Kabardino-Balkaria.

We spent a whole day with Timo and his family. Ahmed joked that now he has a brother and a second family in Germany. In the evening, Ahmed picked out presents for his relatives in a shopping centre. Timo helped carry the basked and gave advice on what to buy. It seemed like the two had known each other not for a mere eight hours but since forever. 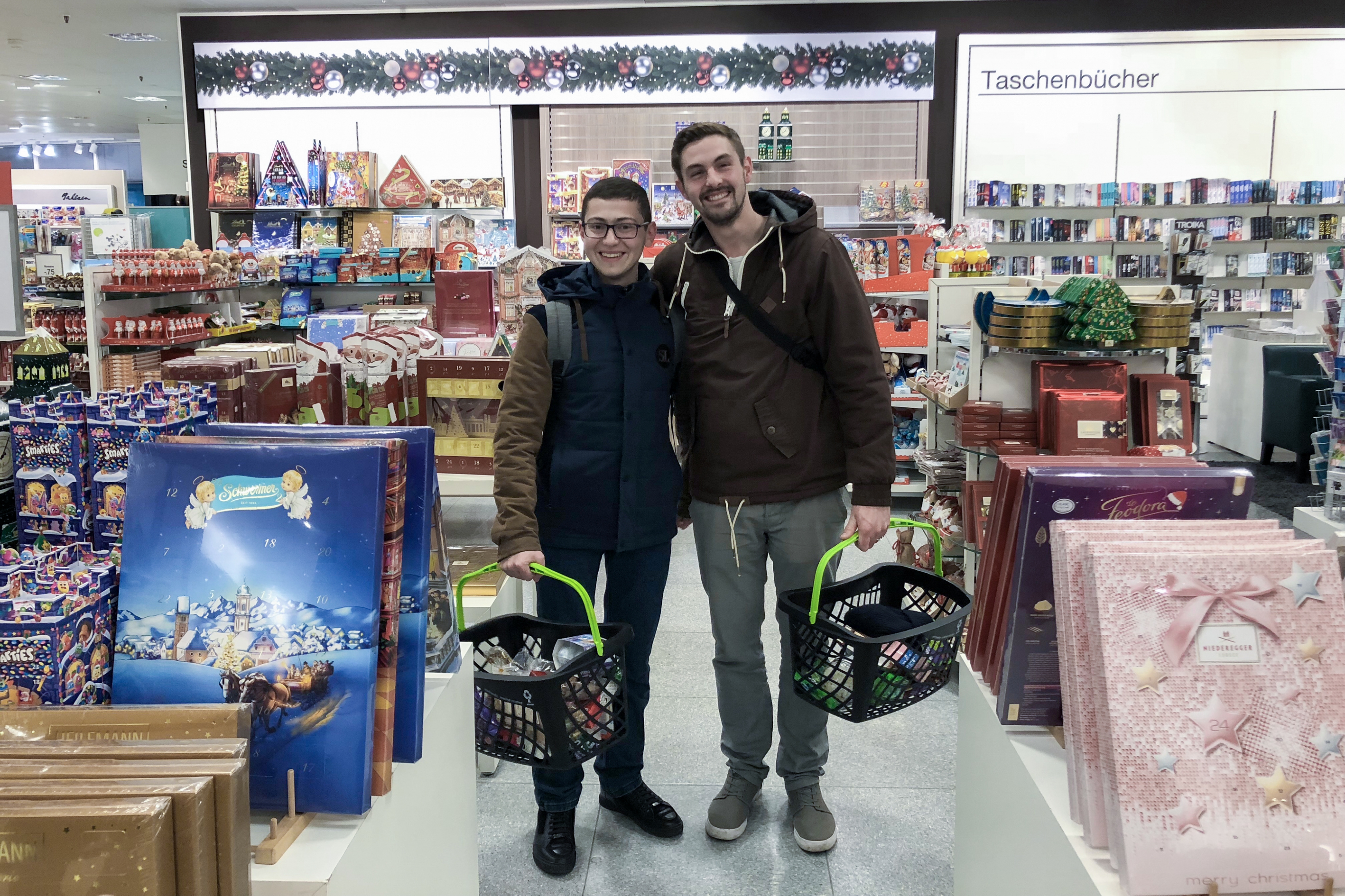 That evening, Timo bought two bracelets, one to keep and one to give Ahmed. They would be a symbol of their brotherhood, now born of more than blood.

P.S. After coming back, Ahmed continues to talk to Timo. Before, he used to say that foreign languages weren’t for him, but now he’s thrown himself into learning German. Timo helps him out, while Ahmed teaches him a little Russian.

Ahmed is truly happy. He asks us to thank once again everyone who influenced his fate over those long years: the donors, who helped raise funds for his treatment, Channel 5, which told his story, and all the volunteers and staff of the charity, who became his family.

You can read the Russian version of Ahmed’s story here.