A surprise for Masha Dyatlova

The big screens show fullscreen photos: Masha in hospital, with a mask, with IV drips. Huge eyes, a mop of ginger hair. Then, shots from a film: Masha’s fabulous hair is shaved off with an electric shaver as she weeps. This is when the parlour of the Mandarin Oriental Hyde Park hotel in London falls dead silent. Masha, too, is watching these shots from her past. She’s sitting among the two hundred guests invited to the Gift of Life annual charity Gala. In accordance with tradition, the Gala is being held on the eve of the Old Russia New Year, the 13th of January – the night when dreams come true.

Chulpan Khamatova, the evening’s hostess, tells the guests Masha Dyatlova’s story, and then invites her to take the stage. Now everyone can see her before and after. The photo shows a sweet 10-year-old girl who fills the heart with pity. And on the stage is a 20-year-old beauty in a slim black dress and high heels, with a dazzling smile and long ginger hair. She delights everyone. The guests applaud at the marvellous happy ending to such a moving story—the little girl was sick, and now the little girl is better. But Masha’s appearance is far from the end of the gala. A surprise awaits, and not just for the guests but for Masha herself. Podari Zhizn has spent several months working on it, and several months keeping it top secret.

Chulpan asks Masha what helped her cure her aplastic anaemia once and for all. A bone marrow transplant. Masha knows who donated her their cells for the transplant. Her name is Florence Marchick, she’s American, and they’re pen pals.

“Do you have a dream, Masha?” asks Chulpan.

“Yes, I want to meet Florence and say thank you.”

“Then what are you waiting for? Say it.”

So Masha says it. She speaks the most heartfelt words of gratitude in fluent English—for the last several years, Masha has been living in America. (Coincidence? We think not!) 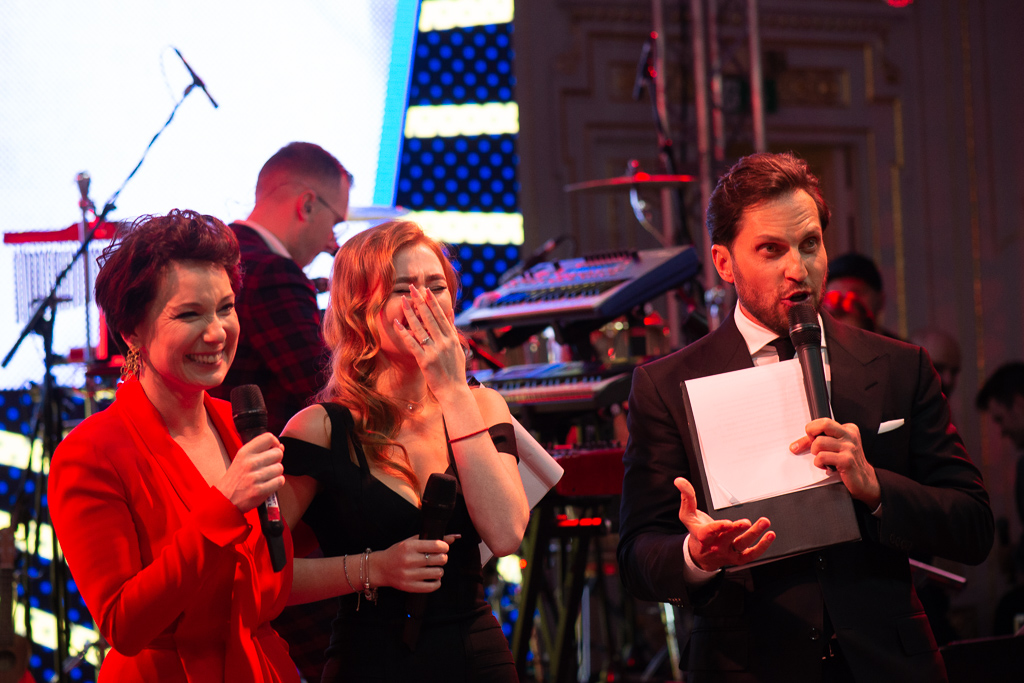 The first few seconds of their meeting 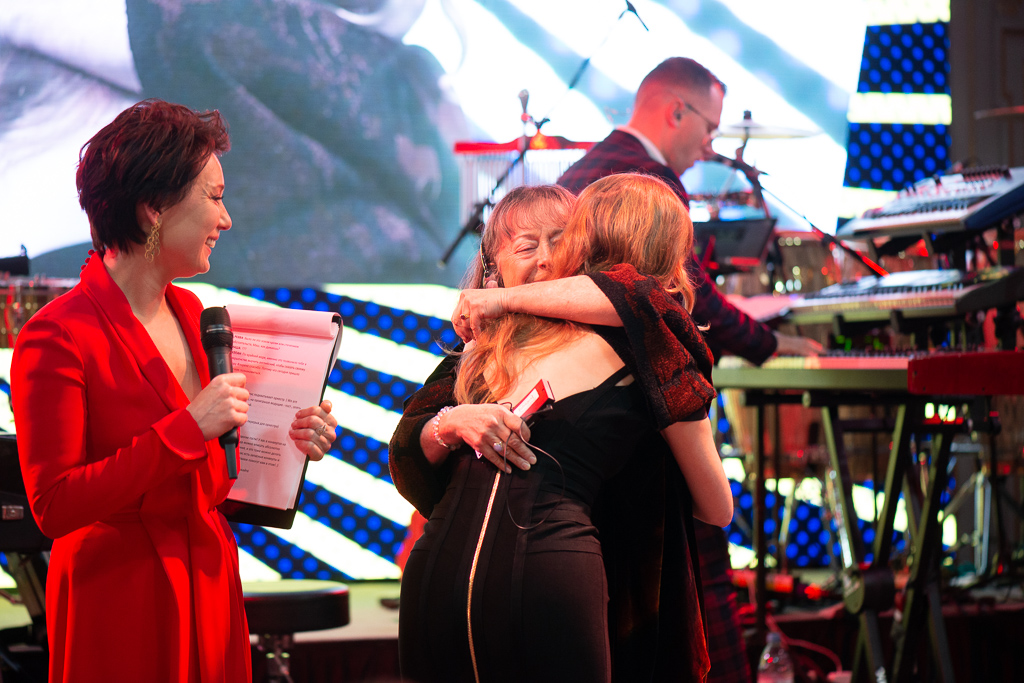 Her words are spoken into complete silence. But also somewhat into the void—after all, the person they’re addressed to isn’t here…

But then we see someone come out from the wings, stride boldly across the stage and open her arms for a hug. It’s Florence! And Masha still has no idea!

And now, finally, they embrace each other. It’s a contradiction: two people who are so closely related, yet almost strangers to each other. Masha cries, and those tears say it all. Her two years of treatment in her native Omsk with no hope of salvation. Doctors telling her that she had six months to live. Two more years in Moscow living on donated blood as she waited for a bone marrow donor, taking pills by the handful, injections and drips. The fear and the pain when the first operation was cancelled (the original donor refused to give their cells). Every night, praying to wake up in the morning. Rejections of donated blood, endless weakness, lost ginger hair, not seeing the veins in her hands, a missing childhood, a constant diet, no chocolate and not even a salad of ordinary vegetables with sour cream… Nothing except hope that one day all of this would finally be over.

“There was no choice to make”

“My name is Florence Marchick, and I’m 64 years old. I’ve been married for more than 40 years, and I have two daughters, and a grandson born not long ago. I was a social worker working with adults, mainly those with dementia and Parkinson’s. Now I’m retired and live in Portland, Oregon, and I’m having a whale of a time! My hobby is rock and roll, and my husband and I have been going to see concerts by our favourite band, the Grateful Dead, for many, many years now.” 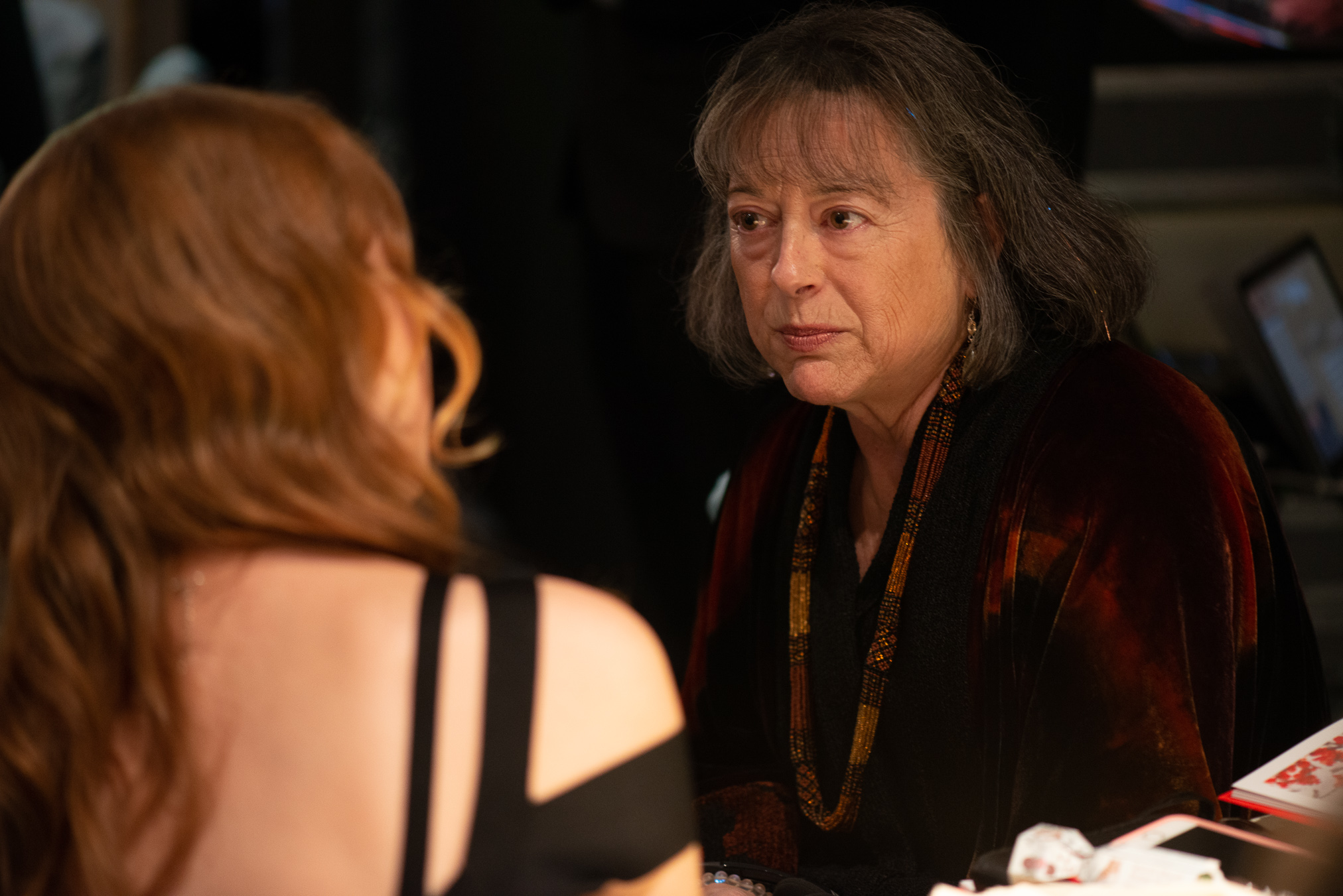 We meet Florence a few hours before the grand meeting. Almost immediately we ask her why she decided to become a bone marrow donor, and whether she knew that she’d be helping a girl from Russia. Her answer floors us. Turns out she gave a saliva sample completely randomly at a festival, and forgot about it straight away. Then, when she got a call asking her to take a blood test to see if her cells could save a little girl, she asked just one question: “Are you kidding?”

“Obviously, I instantly thought about that little girl’s mother. I realised there was no choice to make. I had to do it, even though the process might take time and leave me weak. I’m not scared of pain—I’ve been through major surgery, and besides, I knew perfectly well that the recipient has it much rougher than the donor. I decided that if a little girl could endure all this, then so could I.”

“It was the only childhood I’d known”

Of course, Masha couldn’t begin to guess what was going on halfway across the world. All she knew was that they’d found a donor. This was her second donor—the first one, who’d refused, had been “eaten by tigers”. That was what the doctors told her. Masha didn’t believe them, to say nothing of her mother, but the doctors had to say something to people who’d just lost their only hope of salvation in one fell swoop. 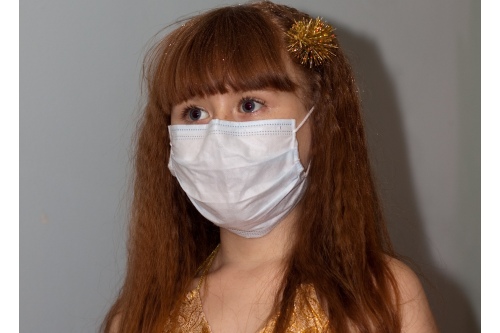 “I’ve known for a long time that everything in my life is in the hands of fate. Everything is a roll of the dice. Will I wake up tomorrow or not? It sounds grim, and I wish it didn’t, but this is just how it was. My mum and I spent several years in hospital, sometimes spending a little time at a ‘clinical flat’ rented by the charity. It was only thanks to the charity that I had anything to do or anything to entertain myself with. There were volunteers who let me feel like a real, ordinary child.”

As an ordinary child, Masha refused to wear a mask at first, but got used to it after a while. She got used to the way people looked at her and the kinds of questions they asked. Then she had to have her hair shaved off, and started wearing a hat. She got used to that too.

“Isn’t it horrible to live with the feeling of people giving you strange looks all the time?”

“That all fades into the background. The only thing on your mind is that you’re constantly under fire, that every day is a war for survival. Every night I prayed to wake up the next morning. When I got too scared, I’d wake up my mum and ask her, ‘you won’t let me die, will you?’ It must be awful to hear words like that from your child. This wasn’t the childhood she wanted for me, but it was the only one I’d ever known. 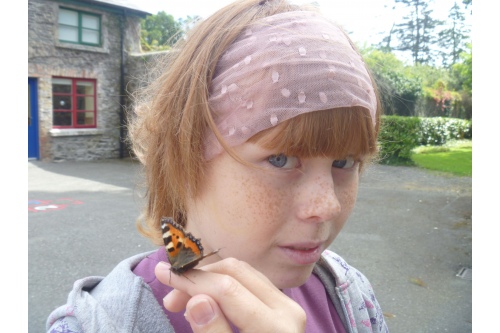 “Every day, I’d fight for the victory called life. I did my best to listen to the doctors and to my parents, and to make sure I took the pills. Yes, I was very upset about my hair. I threw a fit when they were shaving it off. If you think about it, it’s just hair. But I think that for as long as it’s there, you can hide that you’re sick. Whereas when you’re wearing a mask, bald, with blue lips, bags under your eyes, and no eyebrows, you look like the walking dead. Though it’s not like I was ashamed. I knew that it wasn’t my fault I was sick, that God had given me this trial to overcome.”

Masha got used to everything—except one thing. The deaths of her friends. She talks about her life of ten years ago casually and confidently, but this is when she chokes up. “Just yesterday you were chatting with each other, but today you wake up and see his mother gathering his things. When a child dies, the whole family dies with them. I remember how I once decided that if I’m told that I’ll die tomorrow, I’ll ask for a ‘Picnic’ chocolate bar. I’d never had chocolate—I wasn’t allowed sweet things throughout my entire childhood. That was why I decided that I’d at least die happy.”

“Masha had to live her own life”

The blood marrow donor and the recipient can only learn about each other two years after the surgery. As soon as Masha got the opportunity, she wrote to Florence straight away. The two became pen pals, but only in a very restrained fashion. That was how Florence wanted it. “We hardly talked. We just wished each other happy birthday and so on. I was convinced that Masha had to live her own life, to grow up and mature. I couldn’t interfere. Last year, I happened to be not far from New York, where Masha lives, but once again we didn’t end up meeting. But now it seems like the time has come. I really want to get a sense for who Masha is now. What is she doing right now, where is she studying, about her family, her childhood, her interests and the things she loves. How she lives and whom she wants to become. I would love for her to come visit me and meet my family, which could now become part of her family too.” 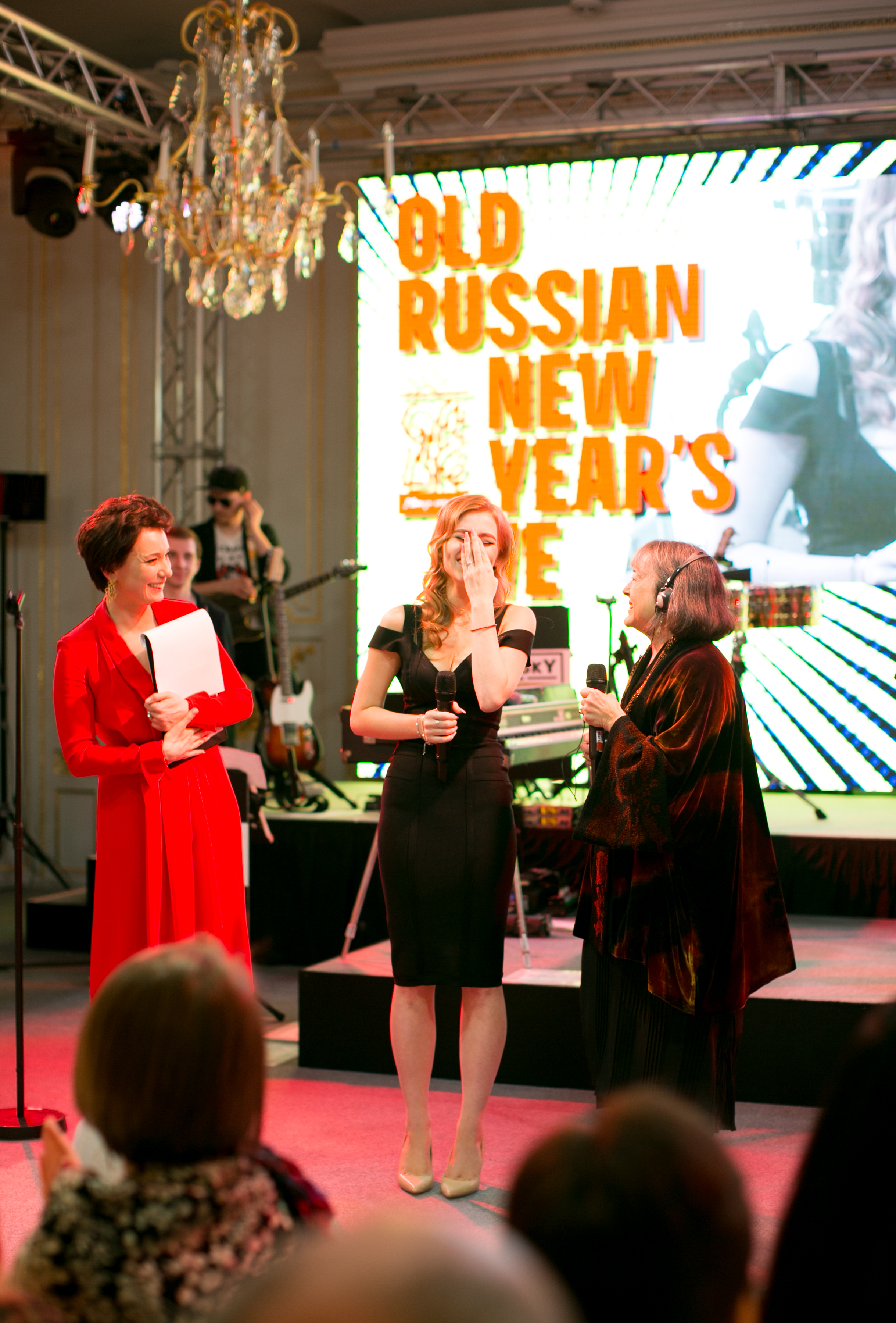 When her primary treatment was over, Masha came home to Omsk. Then, a couple of years later, the family decided to go back to the plan that had been interrupted by Masha’s illness: to move to the USA where her father had already been living for several years.

“I’d barely been to school. I fell ill after my first year, and then only studied in between drips… After I came back from hospital, I was homeschooled. It’s only in New York that I went to school, studied for two years and entered a medical college. Obviously, I’m not going to be a haematologist, but I might be a gynaecologist or a nurse. I’m interested in medicine, and it’s something I know a lot about.”

Two years or so later, despite the doctors’ disapproval, dance became part of Masha’s life once again. “It wasn’t that I wanted to make up for lost time. It was just that I got my strength back. I’d always been active, and I used to do gymnastics. Now I’m dancing and have no intention of stopping. I’m tempted to learn to make a living out of it. But generally speaking, I don’t make big plans for the future. Let everything happen as it will.”

“By the way, about your hair. Did you feel better once it grew out again?”

“I guess so. It wasn’t like I felt anything special. At that point, I had completely different things on my mind. I wanted to finish getting better, and then there was the move to America. But more than anything else, I dreamed of meeting Florence, and I was sad that we couldn’t manage it. I had so much to say to her! She gave me the gift of life.”

We thank all our donors and supporters who make such amazing things possible. Spasibo!